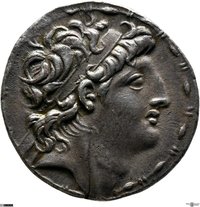 "Antiochus VIII Epiphanes/Callinicus/Philometor, nicknamed Grypus (Greek: Γρυπός, "hook-nose"), was the ruler of the Syrian Seleucid Empire from 125 to 96 BC. He was the younger son of Demetrius II and Cleopatra Thea. He may have spent his early life in Athens and returned to Syria after the deaths of his father and brother Seleucus V. At first he was joint ruler with his mother. Fearing her influence, Antiochus VIII had Cleopatra Thea poisoned in 121 BC.