"Ariarathes IX Eusebes Philopator (Ancient Greek: Ἀριαράθης Εὐσεβής Φιλοπάτωρ, Ariaráthēs Eusebḗs Philopátōr; reigned c. 101–89 BC or 96 BC–95 BC), was made king of Cappadocia by his father King Mithridates VI of Pontus after the assassination of Ariarathes VII of Cappadocia. Since he was only eight years old, he was put under the regency of the Cappadocian Gordius. Early in his reign, he was overthrown by a rebellion by the Cappadocian nobility, who replaced him with Ariarathes VIII of Cappadocia, whom Mithridates promptly expelled, restoring Ariarathes IX. In 95 BC the Roman Senate ordered his deposition, and, after a short period of direct Pontic rule, a brief restoration of Ariarathes VIII and an attempt of creation of a republic, put in his place a man chosen by the Cappadocians, who rejected the idea of a republic: Ariobarzanes I Philoromaios. He was later expelled by Mithridates´s ally Tigranes the Great, bringing another brief restoration of Ariarathes IX, who was deposed once again by the Romans in 89 BC. Two years later, in 87 BC, Ariarathes IX died fighting for his father in Thessaly." - (en.wikipedia.org 12.12.2019) 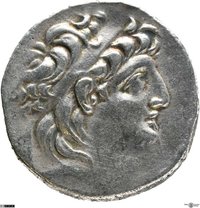