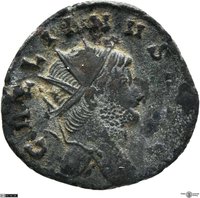 "Gallienus (/ˌɡæliˈɛnəs/; Latin: Publius Licinius Egnatius Gallienus Augustus; c. 218 – September 268), also known as Gallien, was Roman Emperor with his father Valerian from 22 October 253 to spring 260 and alone from spring 260 to September 268. He ruled during the Crisis of the Third Century that nearly caused the collapse of the empire. While he won a number of military victories, he was unable to prevent the secession of important provinces. His 15-year reign was the longest since the 19-year rule of Caracalla.

Born into a wealthy and traditional senatorial family, Gallienus was the son of Valerian and Mariniana. Valerian became Emperor on 22 October 253 and had the Roman senate elevate Gallienus to the ranks of Caesar and Augustus. Valerian divided the empire between him and his son, with Valerian ruling the east and his son the west. Gallienus defeated the usurper Ingenuus in 258 and destroyed an Alemanni army at Mediolanum in 259." - (en.wikipedia.org 30.10.2019) 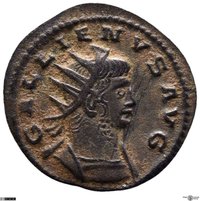