"An epic poem, epic, epos, or epopee is a lengthy narrative poem, ordinarily involving a time beyond living memory in which occurred the extraordinary doings of the extraordinary men and women who, in dealings with the gods or other superhuman forces, gave shape to the moral universe for their descendants, the poet and his audience, to understand themselves as a people or nation.

Another type of epic poetry is epyllion (plural: epyllia), which is a brief narrative poem with a romantic or mythological theme. The term, which means "little epic", came into use in the nineteenth century. It refers primarily to the erudite, shorter hexameter poems of the Hellenistic period and the similar works composed at Rome from the age of the neoterics; to a lesser degree, the term includes some poems of the English Renaissance, particularly those influenced by Ovid. The most famous example of classical epyllion is perhaps Catullus 64." - (en.wikipedia.org 01.03.2020) 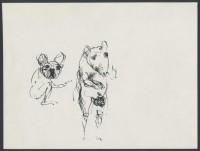